I can’t believe my baby girl just turned three! Although I spent the week prior to her party freaking out a little about how many people were coming (around 33!), I am really grateful for the community we’ve built. It was wonderful to see our friends so generously celebrate our daughter, and to watch her develop relationships with friends of her own. Today, I reflect on three years of Fiona and three (not-quite Pinterest worthy) parties.

First Birthday. For Fiona’s first birthday, we celebrated at my mom’s house in Connecticut with family. I swore I wouldn’t go too crazy for a party she wouldn’t even remember – and then somehow ended up purchasing a party tent. We decided to go for a Country Picnic theme because we could capitalize on existing backyard ambiance (i.e., spread some quilts on the ground). Party store purchases included red and white gingham plates/napkins, a personalized banner, and red hanging poufs. To add to the country theme, I ordered some burlap for a table accent and displayed plasticware in galvanized metal buckets. I knew we’d want to get pictures of Fiona eating her first cupcake, so I wanted to decorate her high chair; I hot glued a ribbon and fabric triangles (found at Michaels) to her tray – the letters spelling “one” are stickers. 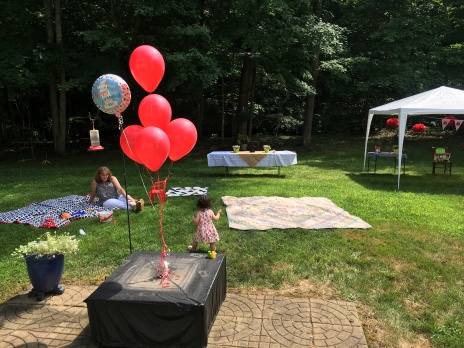 Unfortunately, it started raining pretty soon after the guests arrived and we had to move the festivities inside. The highlight of the party was, of course, the smash (cup)cake. We ordered the cupcakes from Oxford Baking Company and they were absolutely amazing. Fiona wasn’t totally sure what do with her cupcake at first, but she is a quick learner.

Second Birthday. Party number two was held at home and we invited her friends. We went with a barnyard theme in order to reuse some of country picnic decor from the previous year. Party City has a wide selection of Farm Party supplies and favors. This was the first time we invited Fiona’s friends and it totally blew her mind to see her them show up at her house. 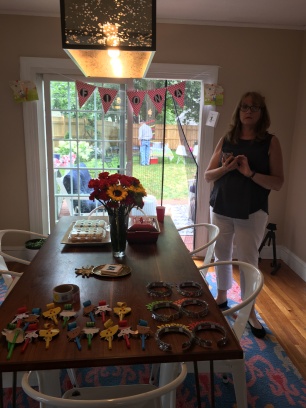 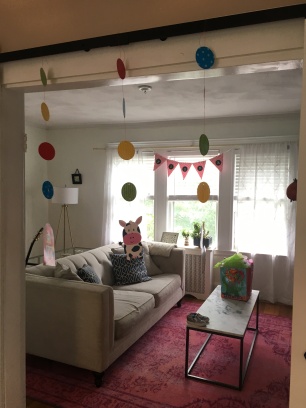 The focal point of the party was the six-foot sandwich from Bob’s Italian Food. We’ve ordered these subs for a few parties now and they’re a great way to feed more than 40 people for 100 bucks. Additionally, instead of cake, we provided assorted pies and cookies. Given that I had never had 10 two-years at my house before, it didn’t occur to me to put the desserts up high; the kids kept going into the house (parents were in the backyard) – we thought to get more toys from the playroom – but they were actually helping themselves to more sweets. 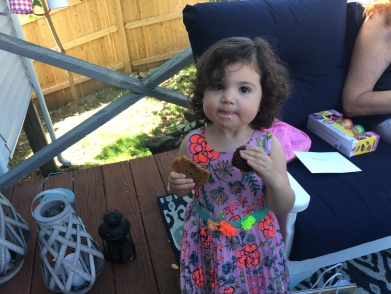 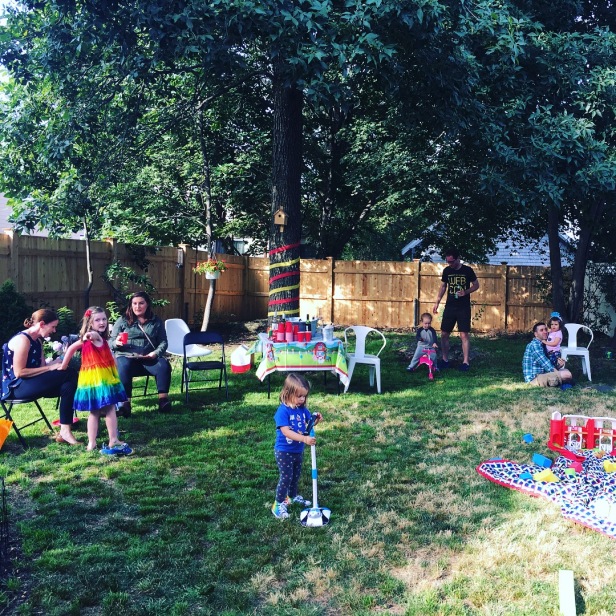 Third Birthday. This year, Fiona had some strong opinions about her birthday party – and really birthday parties in general (she cried when she realized that Jason wasn’t having a theme for his 36th in May). Specifically, she requested a Paw Patrol party with pizza, cake, and balloons. Again, party city came through in the decor department. We waited until Fiona went down for her nap on party day and decorated the house and backyard while she was sleeping. 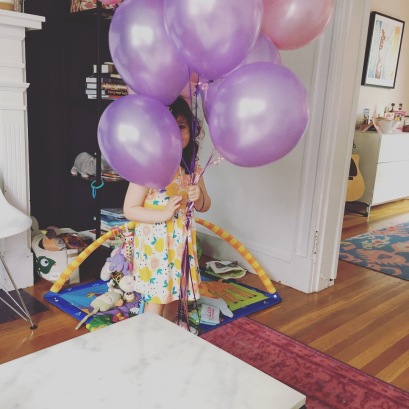 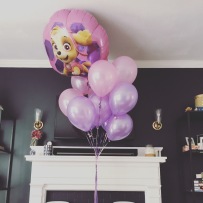 We were expecting 33 people (21 adults, 11 children, and 1 baby). I found this online calculator to help me figure out how much pizza to order. We purchased ten pies: five cheese cut into 16 small slices for the kids, two mushroom, two pepperoni, and one meatball. I over ordered by about 4 pizzas, so we ate leftovers for days. For dessert we served chocolate chip cookies, cut pineapple, and paw patrol cake pops (made by the Cambridge Cookie Queen). We decided against favors and sent kids (and adults) home with Paw Patrol tattoos instead. The best thing (for me) about the third birthday is that the kids all played so nicely with each other and required way less parental intervention; I actually ate dinner sitting down and had two beers without setting the cans down somewhere and forgetting about them.

Overall, I think we threw three successful birthday parties. I’m exhausted thinking about doing it again next year (times 2 – Jason, as a second kid, is always quick to remind me that we have to celebrate Skylar to the same extent as we did Fiona). I’m sure I’ll recover and forget that I told myself we’d do something small going forward. 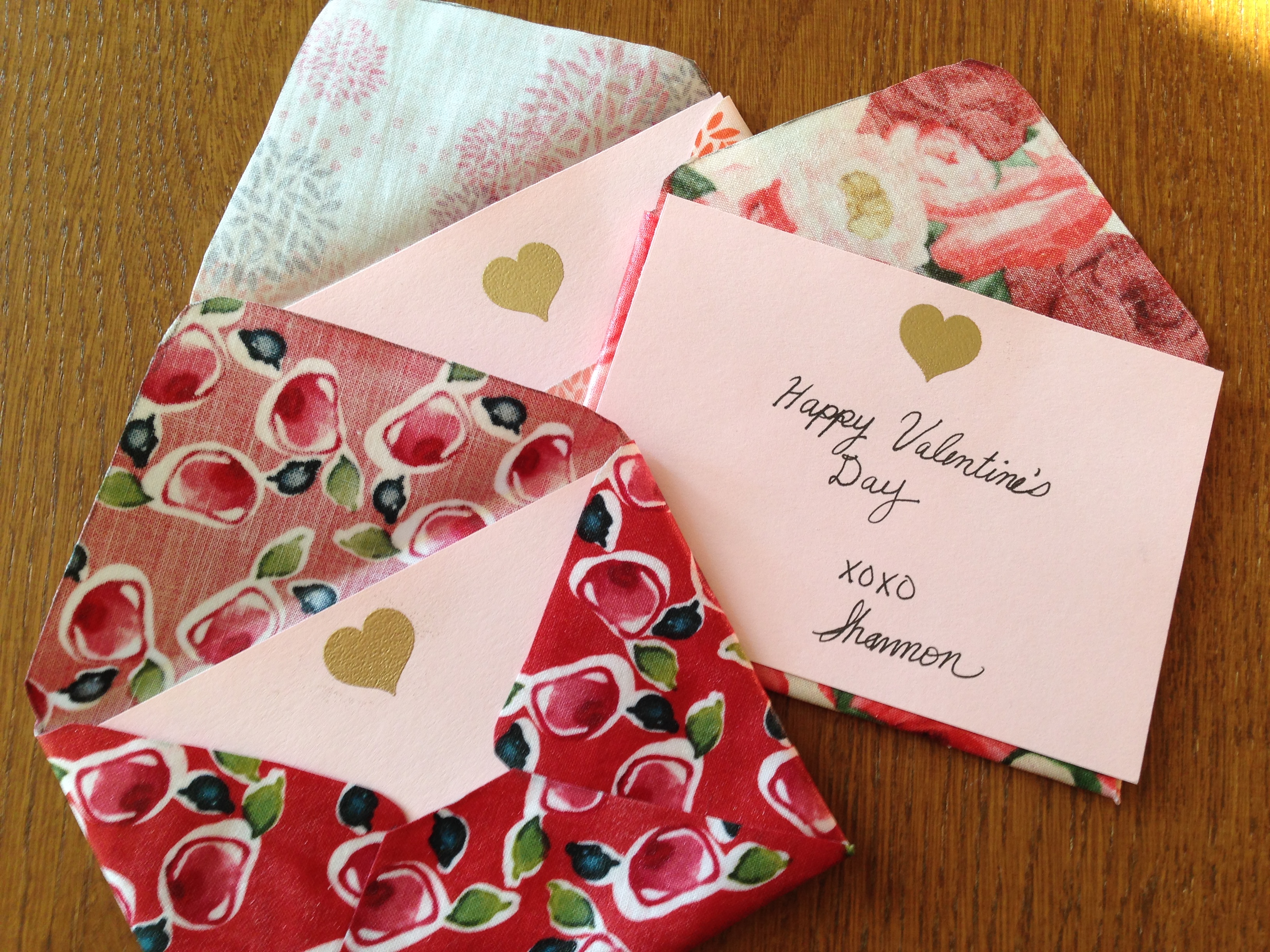